YOPA membership is open to older people and our member organisations who represent the main groups working with older people in York.

Our aim is to raise awareness of policy issues affecting our lives, to be well represented on the boards of the Council and Hospital Trust through our Champions, to sit on policy-making committees, and to speak out in the press and media on local and national issues of concern to older people. We debate issues at public meetings, communicate through our quarterly newsletter, organise information fairs, and co-ordinate the York 50+ Festival in which over 7,000 people participate annually.

We are part of a national initiative which created older people’s forums where the voice of older people could be heard and taken into account by local and national government. We are aiming for a sea-change in the public image of older people – from dependency to resourcefulness – which will benefit the entire community over the years to come.

You are invited to join YOPA if you live within the City of York or surrounding area. Membership is £5 p.a. Click on the ‘Membership’ link in the menu for more information about the Assembly and a membership form. 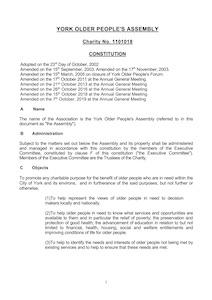 Working for older people in York. YOPA aims to: